As a studio, Mind’s Eye Productions offers a facility for recording with our team of engineers.

As a production house (working alongside our sister companies Dagaz Media and Pocket Universe Productions) we offer a full suite of project development, including:

We have one of the only specialty built audiobook / audio drama focused recording facility in Maine.

Located in beautiful South Portland, Maine, we tap talent from the booming creative scene in Portland (the original Portland), and also regularly bring in cast from around the world and provide accommodations. Portland is serviced by Boston / Logan Airport (BOS), as well as Portland International Jetport (PWM).

We also maintain a network of producers/talent in other major cities, including New York, Orlando, Seattle, Los Angeles and Vancouver, Canada for projects with specialty needs such as Spanish-language speaking, specific casting requirements, accents, etc.

We also record projects on-location throughout the world. Location recording is more like film than the traditional studio approach. A recordist with a portable sound kit follows the actors through real-world spaces to capture a sense of heightened realism. The result is an experience that feels utterly film-like as actors seem to debate, grapple, and fall in love all around your ears.

When producing audiobooks we’re typically hired for a ‘soups to nuts’ approach wherein we get a title, assign a reader, and follow the production all the way through to completion, including QC, proofing, and mastering.

A few tools of the trade:

We offer specialty audio drama services such as: 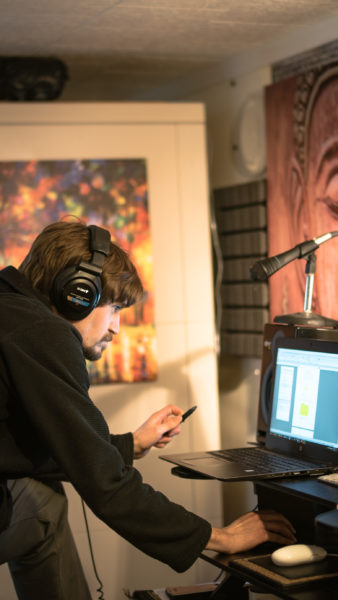 We excel at taking raw tracks and turning them into an edit packed with energy. Did you need to record source material in several locations? No problem! Thanks to RX suite, we can match acoustics across recording sessions, and remove extraneous noise (within reason).

We can also ‘worldize’ tracks: establishing characters into the story world thanks to Altiverb’s industry-standard simulated environments. We build our sessions such that the sound designer (whether us or not) has the ability to pick up the dialogue edit session and is able to seamlessly integrate sound design into the same environments where the actors are placed.

The sound design teams we work with are masters at their craft, and are regularly used for film, TV, and video games outside their work with Dagaz Media and Pocket Universe Productions.

Sound design can be as simple as adding texture and mood to a single-voiced recording. It can also mean painstakingly recording individual sound effects and manipulating real-world objects to create a completely immersive story world that feels like a movie.

Thanks to producer Fred Greenhalgh’s travel bug, we also have access to location recordings from across the globe.

Have a project that needs a home? Need to understand your monetization options? Leverage our experience and relationships in the podcast and audiobooks space to help find the best distribution and promo partner for your project.